Join the master of the macabre, The Twilight Zones Rod Serling, as he invites you into the transfixing world of fantasy, horror and science fiction that lurks within the Night Gallery. In this third and final season of the classic anthology series, Serling once again presents stories that leave an undeniable chill, filled with restless spirits, murderous spouses and unidentified terrors that go bump in the night. Featuring a sensational roster of entertainment legends including John Astin, Bill Bixby, Chuck Connors, Sandra Dee, Sally Field, Burl Ives, Fernando Lamas, Raymond Massey, Burgess Meredith, Dina Merrill, Cameron Mitchell, Leonard Nimoy, Geraldine Page, Joanna Pettet, Vincent Price, Mickey Rooney, Dean Stockwell, Susan Strasberg and many, many more. John Badham (Saturday Night Fever), Leonard Nimoy (Three Men and a Baby) and Jeannot Szwarc (Supergirl) are among the talents behind the bloodcurdling Night Gallery: Season 3available for the first time in HD, from 2K scans of the
More Information
Reviews
Write Your Own Review
Add to Wish List Add to Compare

This item is currently on backorder and may not be available to ship immediately. Please note that due to supply chain delays, we cannot guarantee an exact ship date for backordered items at this time. All items will be shipped as soon as possible once we re-stock.

Be the first to review this product
Special Price $44.99 Regular Price $57.99
Skip to the end of the images gallery 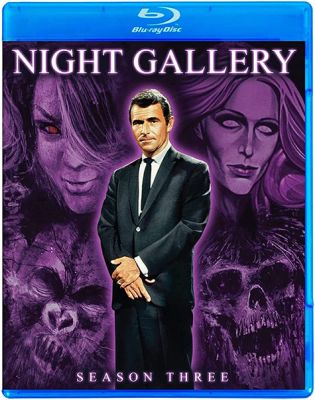